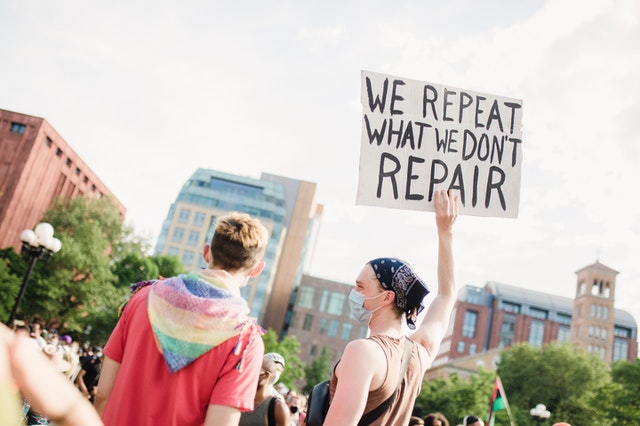 Anti-Racism – How Can White People Help Fight Against Racism?

Part of what we do here at Black Belonging Matters, is to engage in small, everyday acts of activism.  To that end, one of our team members recently joined an anti-racism group on a social media platform.  The premise of the group is basically for white people to hold each other accountable. It also “provides Black people a space to be seen, heard and to show-up authentically and unapologetically as who they are.”

Recently, one member of the group advised that she was being perceived as aggressive due to her posts [presumably on her personal page] that support the BLM movement. She asked what she could do differently.  Our answer?  Do nothing different.  Black people need visible allies.

Social media can sometimes be an echo chamber.  But, as it relates to supporting equality for Black people (and marginalized people in general), it can mean the difference between us feeling like we are all alone in the fight, and realizing that we are not.

I know from personal experience that it is isolating to feel as though Black people are fighting this fight alone.  It is even more isolating to witness coworkers going about their every day lives, posting baby Yoda memes and such, when we as a people were literally dying before their eyes.

It was comforting to witness the world stand with us in the days after George Floyd’s death, even when those closest to us did not.

Today, there’s a certain sense of change in the air thanks to election results, President-elect Joe Biden and, equally as important, Vice President-elect, Kamala Harris.

But, an essential topic is losing its impetus. The Black Lives Matter movement is slowly disappearing from the news, hashtags, and trending conversations. Whether people have become apathetic or comfortable, the situation is quite different than the one we saw in the days immediately after the murder of George Floyd.

George Floyd’s killing caused many white people to face the  reality of their privilege for the first time.  They confronted police brutality and the power dynamics that exists in America. The pain and injustice were too loud to ignore and write off as something only those affected should handle.

The cruelty behind Floyd’s murder brought back repressed feelings, other crimes against Black people, and centuries-old racial inequality. People all around the world stood up against that inequity, and the world walked together, to protest racism against Blacks.

But the protests are slipping from the front pages, even after the killing of Walter Wallace Jr.

Support for the BLM movement among white adults has dropped from 60 to 45 percent,  Support  remains the same among Black and Asian adults. The movement needs every voice to stay relevant and to ensure that white supremacy is dismantled once and for all.

Below are some ways that white people can continue to walk with us and fight racism.

WHAT CAN WHITE PEOPLE DO TO BE A STRONG ALLIES AND STAND WITH THE BLACK PEOPLE?

1.UNDERSTAND THE COMPLEXITY AND LONG HISTORY OF SYSTEMIC RACISM

If you live anywhere in the U.S., or even on a different continent, you are familiar with the anti-Black violence and racism that goes back to the colonial era. Although centuries have passed, anti-Blackness is still looms large in American society. But, many white people are not aware that there’s more to anti-Blackness than police brutality.

For Black people, racial bias and inequality are a part of everyday life, past and present. Systemic racism resides in education, business, health institutions, banking etc.

Although white people didn’t ask for their privilege, and racism is primarily learned, one needs to accept that white privilege is just as real as the racial injustice that exists in every aspect of society. The American dream might be real and alive just as well, but the prerogatives and hallmarks it carries are largely reserved for the whites.

Accepting and recognizing these benefits helps whites understand why the phrase “I don’t see color” is problematic.  Black people have literally been demonized for 400 years due to the color of our skin. Seeing color is important. Understanding the history of anti-Blackness is important.

2. BE VOCAL IN YOUR ANTI-RACISM EFFORTS

Speak up against micro-aggression and racism where ever you are.  At work, ensure that your Black colleagues receive support and that people are held accountable for discrimination.  Often times Black people who experience micro-aggression and racism question  if what they experienced was real or perceived.  Even when Black people know that what they experienced was real, we tend to not report such issues to leadership. This is because such reports may lead to the Black employee being labeled as being overly sensitive due to leadership failing to understand how micro-aggression or racism works.

Consider whether your organization has enough diversity and inclusion policies and if they are effective. If not, discuss this issue with your HR department. Or, if you’re in a leadership position, you can encourage the development of D&I resources and teams, which can help team members share experiences and connect.

Perhaps most importantly, talk about racism with your family, friends, and especially your children. A word of caution though – generally, it is best to refrain from engaging in debates with racists.  The goal is to show support to those who need it, as the average person is unlikely to change deep-seated racist beliefs.

3.  OFFER OTHER FORMS OF PRACTICAL SUPPORT

This heading somewhat melds with the second point above.

Another act of practical support is to bear witness to police interactions with Black people.  This is requires good judgment so as not to interfere with police activity and possibly escalate said interaction.  But generally, keeping distance, keeping quiet, and recording the interaction is appreciated.

Call for help if needed. Again this requires good judgment, as we are well aware of instances where calling for help, especially when calling the police,  has led to Black fatality.  It is paradoxical in every sense of the word.  So, again use your best judgment.

Stand with Black people against all types of violence because if one person can’t breathe, society as a whole will slowly asphyxiate in the aftermath.

As always Black Belonging Matters providers full-scale anti-racism services, and we’d love to help you build your organization.  Feel free to reach out to us.